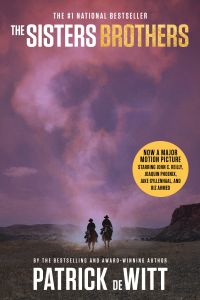 Winner of the Governor General's Award for Fiction, the Rogers Writers' Trust Fiction Prize, the Prix des libraires du Quebec and the Stephen Leacock Medal. Shortlisted for the Man Booker Prize, the Scotiabank Giller Prize, and the Walter Scott Prize.

Hermann Kermit Warm is going to die: Eli and Charlie Sisters can be counted on for that. Though Eli has never shared his brother’s penchant for whiskey and killing, he’s never known anything else. On the road to Warm’s gold-mining claim outside San Francisco -- and from the back of his long-suffering one-eyed horse -- Eli struggles to make sense of his life without abandoning the job he's sworn to do.

Patrick DeWitt, acclaimed author of Ablutions, doffs his hat to the classic Western, and then transforms it into a comic tour-de-force with an unforgettable narrative voice that captures all the absurdity, melancholy, and grit of the West -- and of these two brothers, bound to each other by blood and scars and love.

Patrick deWitt was born on Vancouver Island in 1975 and now lives in Portland, Oregon, with his wife and son.