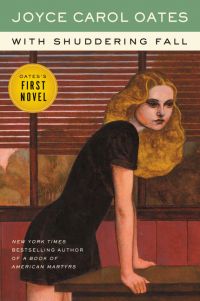 The first novel from New York Times-bestselling author Joyce Carol Oates, a thrilling, dark tale of family, revenge, and two souls intertwined by love and violence—now back in print for fans of America’s most prolific storyteller.

Written when Joyce Carol Oates was in her early twenties, and first published in 1964, With Shuddering Fall is her powerful debut novel, the first of five new Oates reprints from Ecco.

Discover what prompted the New York Times to compare this young writer’s debut to Shirley Jackson’s famous short story, “The Lottery.”  Readers looking for a place to start in Joyce Carol Oates’s vast catalogue will be intrigued by the sheer narrative force of the young author, and her willingness to anatomize the darkest recesses of humanity in a search for redemption and resolution.

Joyce Carol Oates is a recipient of the National Medal of Humanities, the National Book Critics Circle Ivan Sandrof Lifetime Achievement Award, the National Book Award, and the PEN/Malamud Award for Excellence in Short Fiction, and has been several times nominated for the Pulitzer Prize. She has written some of the most enduring fiction of our time, including the national bestsellers We Were the Mulvaneys, Blonde, which was nominated for the National Book Award, and the New York Times bestseller The Falls, which won the 2005 Prix Femina. Her most recent novel is A Book of American Martyrs. She is the Roger S. Berlind Distinguished Professor of the Humanities at Princeton University and has been a member of the American Academy of Arts and Letters since 1978.